The Icon of Mother and Child Reimagined 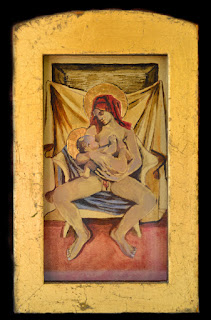 This, to me, is the ultimate depiction of the Madonna. Her yoni is showing to indicate that she is not a virgin. Virginity, historically speaking, wasn't venerated by matriarchal cultures. Before the spread of patriarchal religion beginning around 3,500 B.C.E. virginity was no big deal because the head of the house was a woman, and therefor all her children were known. When the power shifted to the male, he found that his wife's fidelity was important because he wanted to be supporting his seed.

Religion fallows the needs of culture. Now that the sexes are coming nearer to equality, a state I hope for, control of female sexuality will be less important.

The Virgin Mary, who was modeled after a very sexual Goddess, will regain her private parts and the power contained by them.